To celebrate 50 years since the Beatles released their groundbreaking album “Sgt. Pepper’s Lonely Hearts Club Band”, the RLPO are putting on a show with the Bootleg Beatles tribute band to recreate the album (and other songs from the summer of 1967) in symphonic form. So far we’ve played to full houses in Liverpool, Birmingham and the Albert Hall, and have dates in Manchester, Nottingham, and at Festival Number 6 in Wales yet to come.

I particularly like the “updated” album cover with faces from the RLPO making a cameo appearances in the backound! 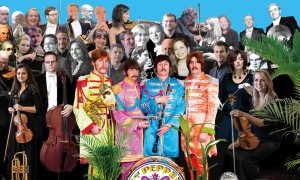